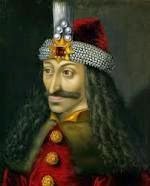 A Night in Dracula’s Castle

This was my third trip to Eastern Europe, the land of my forebears. I had just descended from the Transylvanian Alps, where lay the roots of the maternal side of my heritage. Beyond Transylvania now, I was about to ascend to the castle set on a rocky Carpathian ridge, 120 miles northwest of Bucharest. It was a last minute impulse on the final day of the World Dracula Congress.

Seeking to jump start its tourism industry, the Romanian government invited 300 writers, academics and entrepreneurs to the congress, which included a first-ever tour of Dracula landmarks. Forty had come on this tour to see the Castle of Arges, named for the river that flows freely at the mountain’s base.

My wife, Teresa, walked me to the trail head and insisted I take the blanket she carried from the bus. Others in the group were caught up in a photographic frenzy, too busy to notice my departure.

The air smelled of rain. As a mountaineer, I had spent many cold nights sleeping on icy cliffs. A night of wind and rain in June wouldn’t kill me. We didn’t know if overnighting in the castle was legal, and surely weren’t about to ask our inflexible escorts. Still set in Communist ways, they had one answer for any request beyond protocol: “Impossible.” Teresa, pregnant with my first son, Mason, stayed with the others who would spend the night in village homes.

The clouds grew darker and the sun dropped behind the peaks. I shot through the black forest on the very route the Boyars used to haul brick, stone and mortar up the mountainside. Count Dracul had captured in the Boyars in 1457 after they had killed his brother. They were marched from Targoviste and sentenced to build the castle within two years or die. True to his word, those who succeeded were set free, others had already died from sickness or overwork.

The trail led to hundreds of steps winding upward through the trees. I moved quickly, taking three steps at a time, energized by the fear that one of the escorts would yell for me to stop or chase me down. But it was quiet, save for my steps gaining rhythm, the same upward motion that had trained me for more serious ascents.

It was an easy trek without a heavy load. I wasn’t exactly equipped for a night on a mountain. I had a loaf of bread, two bananas, two beers and a pack of matches, all of which I would have traded later for a flashlight.

The unmistakable roar of the bus engine left me to ponder. I was alone in the forest, deep in Romania, a long haul from my native Arizona. I had no idea where the bus was going. Experience traveling the Romanian countryside convinced me the villagers below probably did not speak English, and public transportation didn’t reach them. I was slated to meet Teresa in Bucharest the next evening. That was tomorrow’s problem.

A uniformed figure stood a hundred steps above me, with an assault weapon and radio on hand. Perhaps he was guarding the castle, I thought, climbing toward him with my eyes cast down. Passing him, I pointed to the castle, saying “Dracula”. He smiled and said nothing. I realized he was guarding the rear flank of the hydro-electric plant hidden in the limestone canyon below.

Breaking through the trees, sweat dripping, I was atop the ridge in 30 minutes in full view of the castle and the road below. The bus was parked a few miles further up the canyon. I waved my arms. I could see everyone, but like Dracula’s reflection, no one could see me. I was in the 15th century now, thousands of miles from home, in an old fortress high on a mountain, home of “Vlad the Impaler”, killer of thousands.

Romanians consider him a national hero for his success in fighting off the Turks. He is most notorious for impaling invaders on wooden stakes and leaving their bodies to rot at public roadsides. ! History shows more than 10,000 Turks were impaled and displayed in nearby Targoviste. Many Romanians take offense at the West’s fascination with the count and the vampire icon he inspired.

The belief in vampirism is a modern day fear in many Romanian villages. In 1960 Boston College Professor Raymond McNally, co-author of “In Search of Dracula”, witnessed villagers in Rudne, near the Borgo Pass, plunging a wooden stake through the heart of an 18-year-old girl who had committed suicide. Other village practices to keep the dead supine include putting coins on the corpse’s eyelids, nailing heads to coffins, slitting the feet to prevent walking, and tying the hands to the feet.

Dracula’s castle is in ruins, although its layout is still obvious with its long corridors, archways and large rooms. It covers no more than 8,000 square feet, and at one time had two stories and a dungeon. I ran through the structure searching for a place to sleep. Lizards, millipedes and slugs crawled around, bringing to mind Renfield, Dracula’s slave in Stoker’s novel, who feasted on night creatures.

A stairway led to a wooden planked bridge where limestone cliffs fell away thousands of feet on both sides. Steep steps climbed upward and disappeared in the castle walls.

By 7:30 p.m. it was nearly dark and raining. I sat on the cliff below the bridge waiting for the rain to stop. When it did, the wind whipped. I was shivering. I scoured the steep hillside for firewood. The work warmed me until I was pelted again by rain. Running to the bridge, I flung the blanket across its railings to create a roof. I needed something to weight the blanket. I clawed at the castle floor for rocks that were caked in hardened dirt. Blood oozed from my scraped knuckles seeping into the dirt; appropriate to the setting. Bat silhouettes spotted the sky, which was no surprise in a land of limestone. Romania has an estimated 11,000 limestone caves.

I noticed an intact archway leading to a 15-foot deep pit. Its wall stretched an additional 30 feet above me. This was part of the very tower from which the count’s wife jumped when the Turks invaded the castle. According to some historians, the Turks had her impaled at the castle entrance.

The count reportedly escaped by riding a horse with its shoes on backwards, fooling the Turks that he had just entered the castle, rather than left.

The night turns black. Wolves far and near begin to howl. Bears and wolves commonly enter the fortress at night, according to the conference escorts. I am stuck until dawn. My mind races. I imagine powerful hungry beasts roaming through the fortress. I contemplate my escape should any such creatures venture onto the catwalk leading to my small encampment under the arch. The bridge is the only way out, unless I jump into the walled pit behind me.

At 3 a.m. the wind is ferocious. My only protection is the blanket I was reluctant to take the evening before. Firewood is low. I have no flashlight. I have no choice but to force my way through the darkness and search for more wood. Fighting the wind, wrapped tightly in my blanket, I walk on broken stones through a high walled corridor leading to the forest. Around a bend, the moon appears and lights my path.

The moonlight raises my spirits. The wolves call. The wind catches my blanket, now a cape billowing in the wind. Shadows dance before me. I’m lost in the moment. I see myself from a distance. A lone figure doused in moonlight standing at the entrance of his cliff side castle. This is the spirit of Dracula.

I run through the wind and easily find a new load of wood. My movements are passionate and free. The activity is invigorating. It’s a magical event to be rushing through the woods and castle walls, alone, at night, with the wind and the wolves on my side.

I sit by the fire listening to the wolves calling, taking in the final hours of a night in the 15th century.

At 6:30 a.m. I disappear into forest. The morning light brings warmth and comfort and takes the magic away. I can easily see through the trees and follow the steps back to the main road. I stand atop the stairs as two armed guards walk up towards me. I smile and nod as they pass. They look right through me.

As told by David Lengyel to Teresa Lengyel, co-founders of Venture Up Travel and Team Building Events.