When Venture Up’s 22-year-old creative director, Mason Lengyel, was in kindergarten, many of his teachers remarked how creative he was, saying, “He thinks outside the box.” This made no sense to Mason. “Why does there have to be a box?”

We ran into this tired expression again today, in an article listing “40 most annoying phrases in the workplace“. Guess which one ranked #2? “Think outside the box,” second only to “Give 110 percent.”

At Venture Up, there are times when we promote thinking inside the box — to find solutions and creative ideas deep within us. These ideas stare us right in the face. We only need to adjust our perspective.

Venture Up’s new game series, created by brothers Mason and Miles Lengyel, conveys this message. These conference room Escape Games keep everyone at the table. The first theme in the series is about D.B.

Cooper, the guy who jumped out of that plane with bundles of cash in Oregon decades ago. (No, they did not really find him. That’s fake news).

Escape the Case is a reverse escape game. It’s not about escaping the room; nobody even leaves the table, except for a nature break. It’s about going inward, starting with a big suitcase and opening cases within cases that get smaller and smaller. 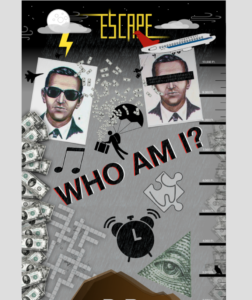 That’s all we’ll say, except the game is explosively popular, affordable, easy, all-inclusive and gives everyone a chance to make fun of the guys on top.

Getting back to the clichés in the workplace, we took our faves from the list and give another way to get a point across quickly when thinking doesn’t come easily:

Boil the ocean. VU: Never heard this one.

Back to square one. VU: Oh, just call it Plan A.

There’s no I in team. VU: There are at least two “I”s in every team.

Elephant in the room: VU: Animals are never objectionable.

Raise the bar. VU: Who dropped the bar to begin with?

Hit the nail on the head. VU: A high level staff member uses this all the time so we just nod.