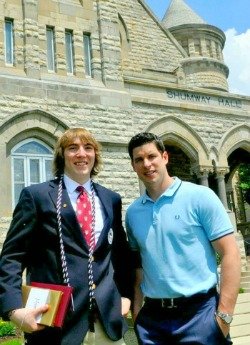 So what do I do here? I’ve been asked this a few times by many people when I first got here. The simple answer would be, “Oh the BioScience program,” which is true. If the Bioscience program didn’t exist I probably wouldn’t be here, much like the hockey or figure skating, or soccer programs is for most of you in the audience. So then people tend to ask, “What I do for fun” and frankly that’s a bit harder to answer.

Aside from gaming, I like taking long strolls, or rolls rather, on my unicycle no matter how late at night it may be. I question literally anything I’m curious about, no matter how strange a shift the conversation may take, because I don’t like unanswered questions. I like to have “unnecessary” equipment on me at all times, like flint and steel, goggles and my leg pack, because I like to be prepared. I listen to only instrumental music, because, I think, lyrics don’t leave much to the imagination. I love thinking about philosophy and the symbolism behind fairytales and allegories, because I believe ethical and moral values are priceless when compared to what you learn in school. Not that I condone skipping school to become little Red Riding Hood or anything like that. The whole point of this really, is it’s more than ok to be weird. The truth is I’m a pretty weird guy, and it pains me to think weird has turned into a derogatory term nowadays. 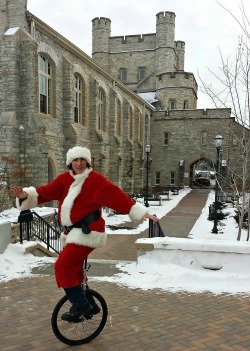 The reason is, “weird” supports your sense of self. The problem I find being affiliated with a group is that people lose their truly unique identity. In a group you are no longer a single great thing, so much as you become a small part of a larger, more primitive entity. And that’s okay, there is nothing wrong with being on a team. Whether the team be a sports group, ethnic group, social group, family group, that’s fine. But for me there’s a point where I take a break from playing whatever game for a while and step back to really get to know myself.

There’s a very short story I want to share, about a road called “Bloody Basin Road” that you pass by on the highway from Flagstaff to Phoenix (strangely close to Dead Man’s Wash which I can’t remember how it got it’s name anyway). As the story goes, a herd of sheep were grazing by a nearby cliff (the desert isn’t as flat as most people think), when all of a sudden, accident or not, one sheep went over the edge and the rest followed.

I like the story better than the common moral question “If all your friends were to jump of a cliff, would you?” Because people are obviously smart enough to know not to throw themselves into a ravine just because the person in front of them did. The real issue is the individual sometimes forgets to think when they shadow other people’s actions. Often, they can’t see what lies beyond the person they’re following. So that’s why I believe it is so important to have a strong sense of self, despite being called “weird” by everyone else. In fact, you should take it as a compliment, ’cause when you really think about it, how could you not be weird?

Lets think about this on a cosmic scale. Earth is the only known planet that can sustain life, a planet that sustains things capable of manipulating energy at will and in such a way that it battles the forces of entropy to maintain it’s own existence. And of all the life we know about, human beings, highly advanced multicellular organisms, us, have sentience.

We are so conscious of the world around us that we create things, put stuff together, no longer for survival, but out of enjoyment. And it’s beautiful. Given a telescope, I don’t care what you could show me light years away. No Blazar, Quasar, Supernova, Black Hole, Nebula; it doesn’t matter because they don’t compare to us. We, here, are literally the weirdest things out there, like it or not. So really, being more weird means being more human, and it means you’re being more you.