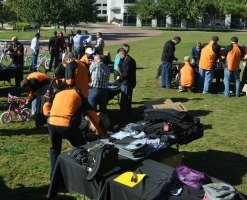 American firms spend $70 billion on corporate training annually and $720 million on employee engagement. Hiring staff with strong skills in leadership and teamwork gives managers a head start when building teams, as many Indiana companies know. Indianapolis has many resources for vets and companies to connect, and one Indianapolis-area firm is crossing the state border to recruit even more.

“When companies hire veterans they are building their teams with strategic thinkers, highly disciplined in teamwork,” says David Lengyel of Venture Up Team Building in Indianapolis. “A veteran has been screened, trained and tested by the most powerful organization on the planet. When business teams make mistakes it can be costly, but when military teams fail it can be fatal.,” he says. “Teamwork is serious business in the military. A veteran’s leadership and team skills are embedded for life.”

Since 1983, Venture Up has delivered team programs for many government and military groups, including the Army Rangers, Navy Seals, high ranking military leaders, the Secret Service and FBI. When working with private corporations, Lengyel finds many managers also have military training. “While an MBA is the traditional route to upper management, high ranking military status is another strong path,” Lengyel says. An MBA is a waste of money, according to billionaire Mark Cuban, a business graduate of Indiana University. He believes you can fill in your knowledge gaps with online courses and field experience.

Subaru Indiana Automotive is scouting veterans in Fort Campbell, KY for its assembly team north of IndianapolisMore than 10,000 vets work for GE, and one in 14 GE employees is a veteran. GE’s vision is to be the “employer of choice for veterans, reservists, and guardsmen,” via the GE Veterans Network, a far-reaching program involving communities nationwide and veterans support groups.

Aside from the Network, GE’s Transition Assistance Program delivers mentoring to vets in cooperation with the local Hiring our Heroes initiative, offered by local Chambers of Commerce. Seminars are designed to help military communicate and utilize their military skills to benefit the corporate world.

Jessica Genereaux is a business writer and independent marketing consultant. Connect with her on Linked-in.