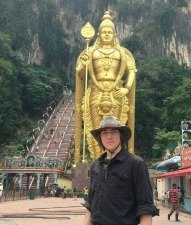 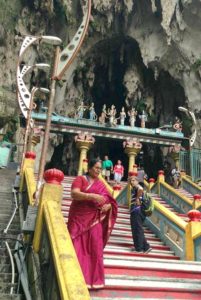 It was August 2014 in Kuala Lumpur, Malaysia. My son Mason and I were on a business trip to Southeast Asia, also celebrating his 18th birthday. Our business web site, created in 1998, was in dire need of upgrading and it dawned on me as I sat in our suite at the Doubletree Hotel that I could meet with some hot-shot IT experts while in Malaysia. Not savvy in the in IT world, I emailed six companies and one replied immediately.

I met the head honcho in the lobby the next day. I struggled to come up with the right questions to ask and the meeting was over in less than an hour.

Mason and I stayed in the lobby figuring out the best way to get to Batu Caves, a nearby Hindu shrine and natural wonder. A young woman who looked just like the Guess model came and sat down in our section. Our company, Venture Up, had just run a team building event in Los Angeles for Guess where a massive image of a video on the conference wall showed their models in action. As she left, I realized that was her! We were sitting with Gigi Hadid. She had just finished a shoot in Malaysia for Harper’s Bazaar. 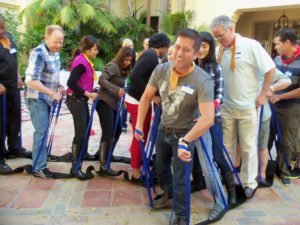 A proposal landed in my inbox the following morning. The cost for revamping our website was higher than I’d expected, but the real hesitation was that I wasn’t certain what I was getting into, so I declined the offer. We spent the rest of the day at Batu Caves and flew the next day to Indonesia!

A student at the University of Alaska-Anchorage, Mason had not been in Indonesia since he was age 4. Upon arrival in Manado, Sulawesi, he was ready for a seaside internship and scuba diving certification course at Murex Dive Resort, a business associate.

Sitting by the Celebes Sea on the north of the island, work issues were still c 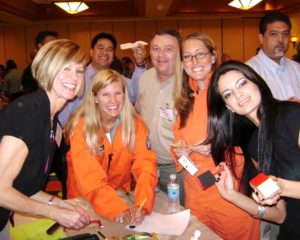 hipping away. I noticed one IT company from India continued to email me. I had mistakenly messaged them in Kuala Lumpur thinking they were in Malaysia. (The India firm shows up well on the Google searches, even when I searched for IT in Kuala Lumpur). I didn’t respond at first. My husband David, still back in the states, was impressed at the firm’s persistence.

When I first contacted the India group, I had another business idea in mind. I’d try them out before trusting them with our main website. We knew it was a risk doing business overseas, but Amit Bajpai, the Business Developer Manager, had us convinced he could make things work.

We dove in. True to form, we took a big risk. We had them work directly with our main website, ventureup.com. Google’s new algorithms knocked us off page one for many searches. We had rested easily on page one since 1998, ignoring our website – which totals more than 100 pages and sadly, over-stuffed with keywords. So, we were on our way to make our site Googlicious. Luckily, so much of our revenue relies on a loyal list of repeat clients, so we could easily afford to procrastinate in measuring up to the new Google.

The India company told us it would take two months to get the website done. What? We approved the pretty markup they sent us. Why would it take so long? I had thought most of the work was already done, but a big learning process lay ahead. When custom designing a website from scratch, one soon understands how pretty mark-ups require a complicated process to get them looking that way and functioning correctly in the digital realm.

When we discovered the options available, we caved into a habit of adding and changing details and features, such as an on-site blog and a quote page for sharing, the latter of which didn’t work out. We realized how some little changes may take a few seconds, while others take five hours. Who knew? (The smarty-pants techies, that’s who!)

Kicking off the New Year 2015, the website finally found its way to the masses. We survived the outsourcing process with plans to continue using India for IT services.

If you are toying with the idea of outsourcing, check out Fortune Magazine’s Global Outsourcing 100, the annual listing of the world’s best outsourcing service providers. Or you can be brave and go in blind as we did, which is easy to do when you can’t get fired.

In all, there were a few communication problems, but the India staff quickly made corrections and provided good service with fast turnaround. If you are revamping your website, here is some humble advice: take screenshots. Be explicit. Number all directions or corrections. Chances are you are not dealing with native English speakers, but rather a team of qualified IT staff, not just one or two techies. The good news is the different time zones. When you team up with people half a world away, you can work during the day on corrections, and wake up and find all corrections are made.