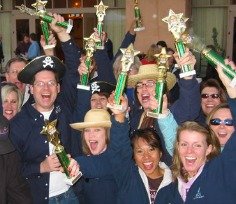 Houston is home for the most Fortune 500 companies in the nation, so it’s no surprise that the Houston Business Journal attracts business consultants to its pages, leaders in human resources and business operations,  offering a great resource for small as well as large firms.

Based in Washington, D.C., Alison Green consults businesses on her website www.askamanager.org, and is a contributor for the Business Journals. The Houston Business Journal recently included a column answering a business leader’s question, “Do I need to disperse perks evenly among my team?”

That’s a good question, considering equality in the workforce is a major issue with many companies. When it comes to in tact teams, a manager risks damaging the team if a single individual, or a few members are rewarded when others are not. It all comes down to this: Does a team have standouts? Well, yes. What’s important when rewarding a team member is the manager’s approach.

The manager seeking Alison’s advice said he was dealing with a team of six, half of whom performed well. On a holiday,  he was at first going to let the entire team off to celebrate a few hours early. But he really felt only half of them deserved it. The underperformers needed more coaching and had trouble meeting deadlines. Luckily, each team member’s performance level was known only to the manager, which may keep rivalry at bay, as Venture Up sees it, or keep underperformers unmotivated if there are limited consequences for not stepping up.

This manager was too conflicted to make any choice to give team members time off, so he didn’t let anyone go home early for the holiday.

Alison replied that sending everyone home early for the holiday would have been a better course of action vs. sending only a few, noting that the reason for the perk would not be related to anyone’s performance. If the manager felt strongly that his lower performers who don’t respect deadlines should stay, one approach would be to informally bring the higher performers aside, congratulate them on their work, and let them go early. This subtle approach is effective, vs. a grand, blunt announcement that would divide the team.

If later a lower performer on the team challenged the manager as to why others were not allowed early release, Alison had a response that hit a home run in driving the importance of deadlines across. “If someone else asks you why they didn’t get released early too, you can simply say, ‘We needed some coverage but not full coverage, and Jane and Fergus had finished everything I needed from them,’ ” replied Alison in the business journal article. Brilliant. No need for further discussion. This response went to the heart of the matter.

In this case, the impact of missing deadlines strikes on a personal level, at the core of the individual. Personal accountability comes into play when employees realize they are responsible for not leaving early, which affects their personal life and family. Who wouldn’t want be surprised when a loved one arrives home early for a holiday? The under-performing team member instantly makes a connection that she or he could easily have had the same perk had the work deadlines been respected.

Venture Up training programs focus on the need to strike the core of the individual. Behavior change begins with the individual, before it reaches staff relationships and team performance, and ultimately, the organizational culture.

Alison is right on target when she affirms that perks don’t need to be distributed evenly in terms of performance. “It often makes sense to treat people differently depending on how they perform.” she says, adding that some perks should be a group event.  “You wouldn’t want to invite only some people to a team dinner or outing,” she says. Alison’s approach keeps performers rewarded, while keeping the team in tact.