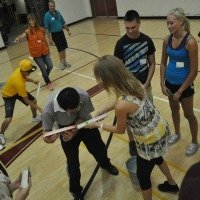 You’re sitting in a big classroom and the teacher asks, “Who wants to volunteer?” One hand creeps up. An elderly person falls unconscious in a Walmart parking lot. One person stoops down to take a pulse and get an i.d., another calls 911. The rest stand around. Sociology experiments over the decades have shown that the more people are in a group, the less likely is one to step up; the so-called bystander effect. But what drives the one or two people to step forward? Ask them and they call it “human nature.”  To many of us, it’s leadership.

Stanley Milgram’s obedience experiment at Yale in 1963, and those of other researchers that followed, showed the natural tendency for people to obey authority even when ordered to inflict severe, and even fatal, injury upon another. Yet what about the few people who withdrew from the experiments, or refused to participate at all? Perhaps they share a higher ground of morality, but are they not leaders? After all, nearly everyone else is going along with orders.

Something inside them sets them apart from the majority. They may not be the best speakers or the most extroverted, but they have an un-teachable quality at their core, one that modern corporations would do well to seek out.

However humans act in a particular hierarchal setting, science can analyze it, show statistics and draw upon the biology and social influences that drive human behavior. Forget “free will,” say some experts, human biology and environmental conditions are at the root of it all.

Professor Robert Sapolsky, Stanford’s humble and humorous neuroscientist has been studying primate behavior with baboons in Kenya every summer for decades. One of his most profound discoveries happened by chance. The most dominant baboons in the 62-member troop fought each other for food, but fhe winners later met their demise. The troop came upon a tourist camp with leftover meat, which was later found to be infected with tuberculosis. The dominant males, the most agressive fighters, comprised 50 percent of the troop. They died off, leaving the more passive and cooperative males to take over.

They were the “nice guys,” as Sapolsky refers to them in a National Geographic film about his Kenya research. The baboon culture changed and the group became more cooperative and peaceful, a shift that carried over for the next two decades. The cooperative society remains today, even though some of the males living during the initial tragedy died. When more aggressive baboons came to join the group they learned to change their behavior to suit the established, cooperative troop. “The jerky new guys are obviously learning, ‘We don’t do things like that around here,” Sapolsky said.

Primate studies at the Living Links Center in Atlanta show similar findings. Director Frans B. M. de Waal affirms that their research with rhesus monkeys indicate cooperation can be learned and reshape the primate’s social structure over the long term.

“The good news for humans is that it looks like peaceful conditions, once established, can be maintained,” he said in a New York Times article by Natalie Angier.

If Darwin were alive today, would his famous words be:

“It is not the strongest of the species that survive, nor the most intelligent, but the one most responsive to cooperation?”

Or did Darwin just make a typo?